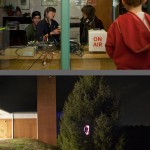 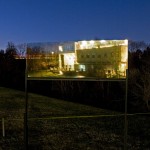 Let There Be Light occurs over a three hour period every December on the grounds of Piedmont Virginia Community College in Charlottesville, Virginia. These site-specific works were made for the show based on principles of reflection, transmission, and interference.

Chandelier – 2011 – 9’x20′ mylar sheet suspended from 14 large balloons at the edge of a pond, moving with the wind and reflecting light from a full moon and other adjacent sources.

Bondfire – 2010 – Collaboration with Greg Kelly and Jesse Dukes, a pirate radio broadcast based on accounts of fire. Stories were recorded via public voicemail prior to the exhibition; during the show audience members sang and told fire stories live on the air. We broadcast via a WWII-era transmitter up to a 2 mile radius.  Outside the building a video of fire was placed in a tree; radios were scattered throughout the grounds playing the show.

Reflection – 2009 – 4′ x 8′ sheet of half-silvered glass was positioned between the college arts building and an adjacent highway, transmitting and reflecting light from both sources simultaneously.